The first ever BMW motorcycle know as the R 32 was built in 1923 by  Max Friz. BMW who used to build aircraft engines, were banned from building aircraft and aircraft engines by the Treaty of Versailles after Germany was defeated in the First World War. This was a good thing because Max turned his engineering talent that he has honed in making aircraft engines  to manufacturing a transverse twin that is know as the Boxer twin today. Another motorcycle company know as ABC (1919-1923) also manufactured a transverse twin designed by Granville Bradshaw  well before Friz came along and adapted his engine. ABC went of business in 1923 but BMW never looked back.

The R32 has a  486 cc (29.7 cu in) engine with 8.5 hp (6.3 kW) and a top speed of 95–100 km/h (59–62 mph). The R32 was quite innovative and way ahead for it’s time. As a engine lubricating system, it used a wet sump oiling system versus a total loss oiling system or a dry sump oiling system that was a standard at that time.The cast iron engine was a side valve with a cast iron cylinder head as well. The final drive instead of a chain as was the design of most of the motorcycles at that time, used a shaft final drive, which was connected to a pinion driving a ring gear on the rear wheel hub. The shaft in turn, took it drive from the gearbox.

BMW continues to use the R32 shaft drive/Boxer twin concept on it’s motorcycles until today.

In the mid 1970’s the Honda CB750 crashed the motorcycle party, literally. The first of the superbikes that set the trend for stereotyped Japanese machines and led to the acronym ‘UJM’ or the “Universal Japanese Motorcycle” as the big boys of the Japanese motorcycle industry, Honda, Suzuki, Kawasaki and Yamaha went about making clones of each others machines. These machines were typical of the CB750. Four cylinder machines that breathed through a carburetor apiece with the gearbox being part of the engine or ‘unit construction’. The engine was set in a twin downtube tubular frame with a swinging arm. Suspension consisted of telescopic forks up front with twin hydraulic/spring loaded shocks at the rear. A single front hydraulic disc brake with drum brakes at the rear was the norm. These machines were so well made for their time that they sold by the thousands.

The R90/6 was produced from 1974-1976 and for a 210 kg/462lb bike it handled really well. The kick starter was done away with and an electric starter was the order of the day -it was the first BMW with an electric start! Upfront the drum brake was swapped for a single 10.25″ disc, that increased power definitely needed it. The transmission gained another gear upping it to a 5 geared transmission.After a production run of  21,000+ it was upgraded to the R100/7 and the R100S. 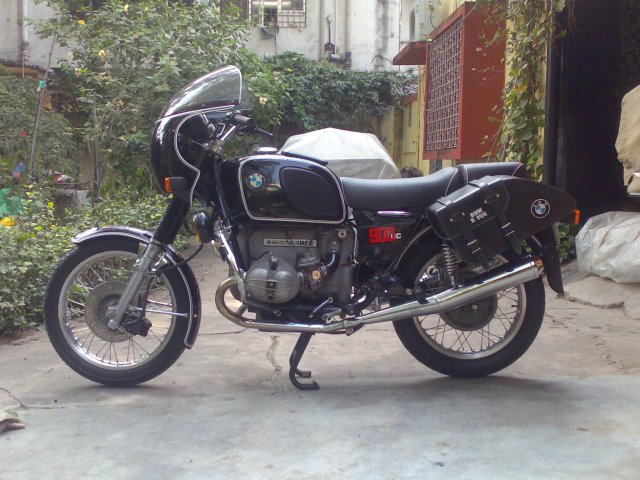 Picking up from where I left off ……I’d always lusted after BMW airhead twins but they seemed elusive and hard to find, understandably so as they are comparatively highly priced – even to this day. I was spoiled for choice lately when it came to British twins in spite of them being quite hard to come by at one time. Once I had entered the rarefied atmosphere of twins, got over my altitude sickness and come to terms with their pricing , there seemed be quite a few of them around if you were patient enough and if you ready to fork out unmentionable sums of cash at short notice. I still picked up the odd Brit single, restored and rode them, all the while keeping a weathered eye open for a beemer.

In the meanwhile I  had taken time off to go riding with a really good friend who lived half way across the country. Now this buddy of mine had a beemer and I was looking forward to a ride on it. I finally made it over to visit him after a few no shows. To my bad luck it started raining  with drizzles and cloud bursts turning up out of no where. Each time we wheeled the bike out to take a ride, it would come down. After going through this thrice we decided, darn it let’s go riding and damn the rain!

As we filtered through traffic in fine drizzle out onto the highway, with people giving us and the bike curious looks at stop lights, I  couldn’t help but notice the odd rocking sideways motion that are so typical of horizontally opposed twins and this beemer. Once we left the city behind us and hit the highway, the BMW was into its own. The rocking motion turned into a thrum as the bike crept up in revs, the broad powerband held no surprises as the bike ‘clunked’ its’ way up to the fifth in top gear. It accelerated very smoothly with no jerky power surges picking up the revs smoothly from 1500 to a little above 3500 with the bike effortlessly clocking an easy 100 km/hr ( the engine redlines at 7000 revs) with us riding two up!  We stopped for a smoke and a breather after a 50 km run and then he offered me the bike to ride when we were ready to start out again. I sat on the broad seat, my feet on the ground with the cylinder heads poking out on either sides of the bike in front of me with a silly grin on my face, thumbed the starter button and the beast came alive! Once I had got the bike into motion, the rocking vibes came at me from every place. Through the seat, the handlebars and the foot pegs . As I opened her up doing some jerky up shifts until I found the right combination between the clutch lever travel and gear shifts ( with the clunking from the gear box not helping at all). Once I had gotten the feel of things, we were off for one helluva ride! I’ve got to admit that it took me a while  to get used to the gearbox but with a bit of experimentation I was riding the bike the way it was supposed to….effortlessly. Just as I got the beemer going at a  pretty good pace and I was enjoying myself, the heavens came down and I could hardly see a few meters in front of me.

I pulled over and handed the bike back to it’s owner because I hadn’t a clue as to where I was going with the visibility being what it was. He took us back home, riding through the rain with the bike handling brilliantly in the wet without a single false move. Leaving me impressed and blown away with the performance and handling ! 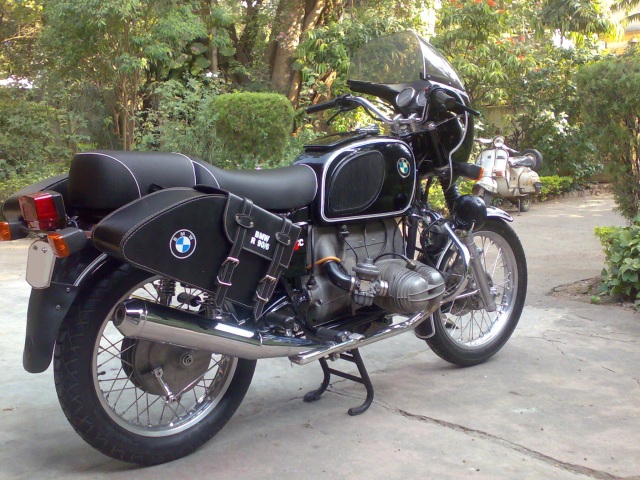 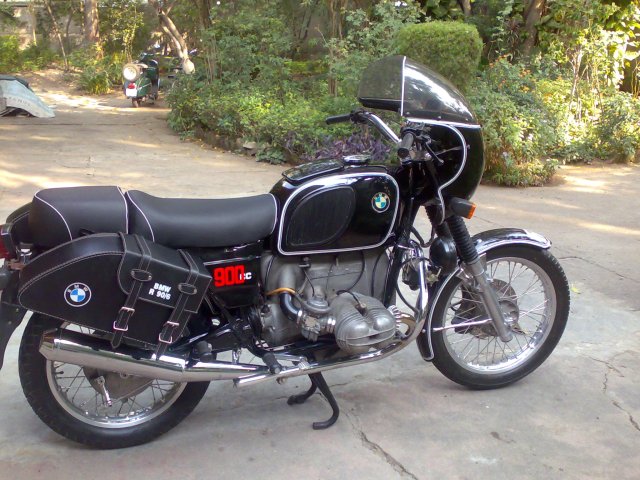