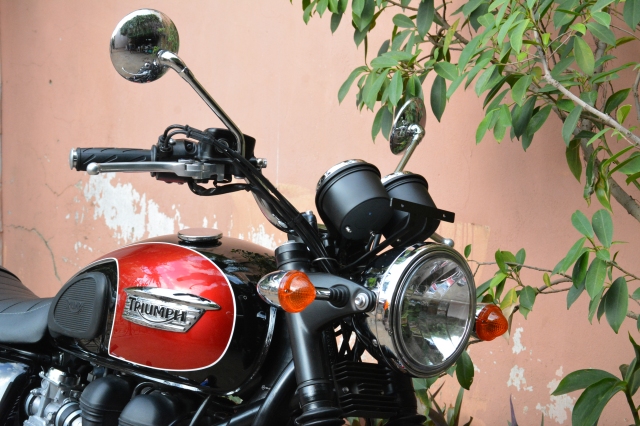 Every generation leaves their unique stamp on history. An ‘ICON ‘. Something so unique that it makes the present generation to wish they could have been a part of things gone by. The  old is so iconic- that you want your new thing to look old-to mirror that icon as closely as possible. That’s what the fuel injected, air cooled, 865cc Bonneville- T100  parallel twin with the iconic Bonneville  pedigree to live up to, is all about and not. A time machine-with a twist. It’s a double barreled machine with smooth pulling responsiveness, twin peashooter exhausts that burble with a mellow beat while idling-nothing like the near roar of its namesake. There’s loads of bling -chromed engine covers, shocks, pipes, headlight, turn signal stalks, mirrors, it’s all over! Black analog instrument cluster-speedo and tacho. Triumph logo on the seat, two toned paint job, spoked wheels, fork gaiters. You’ve got the idea by now I guess. Motorcycling the way it used to be. A way back machine -sixties style but with a bit of today’s technology. I would have preferred ABS, Traction Control and dual discs up front as a standard part of the package on a 2014 machine. I guess I will have to ride it and live with it like I do with the older machines -nothing wrong there at all although I would still have liked the advantages of 21st century technology built into this machine to turn it into an icon in it’s own right because even though it may try as hard as it does it comes no where near the charismatic Bonnie of old ! I’d like to think Triumph skimped on these along with standard stuff like a center stand and a lockable tank cap among others, to keep the cost down and not because of lazy engineering.

I’ve ridden the Bonneville SE base model with the 17″ wheels and does it handle beautifully! It’s more like a modern bike but I’m fine with the more relaxed steering 19″ front found on the T100. If you’ve ridden a classic and like it, then you will be more than just fine with the T100 I just wish they would have kept the weight down .

The changes made to the Bonneville SE-base model  that turned it into the T100:

The fuel injection makes the bike kind of jerky when you roll on the throttle after a gear change (maybe it’s because I’m still running it in. If it keeps it up after the running in period I’ll have to get the ECU remapped) -it’s not like the classic Bonnie or Speed twin where you have to roll on the throttle a wee bit slowly after a gear change. A cylinder bore and stroke of 90 x 68mm makes this motor over square: the bore (width) of the cylinder is greater than its stroke (length). Over square engines excel at revving high and producing a lot of power for their displacement, at the expense of low-end torque.This baby likes the throttle to be whacked open! There’s loads of engine braking when you get off the throttle though.It is a bit cumbersome in the parking lot but hop on it, get riding and you’re smiling, almost instantaneously and you won’t be stopping by the side of the road anytime soon because of carb problems ! 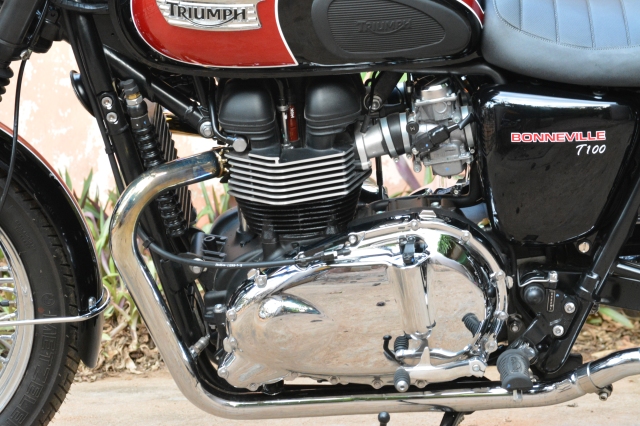 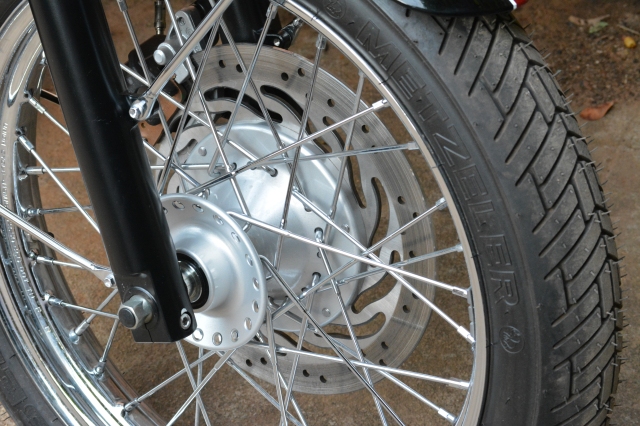 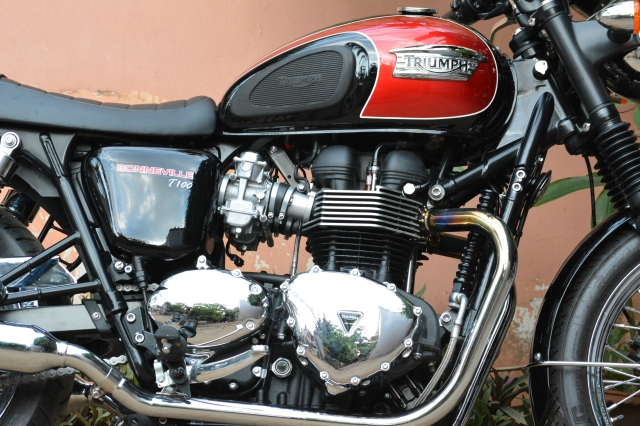 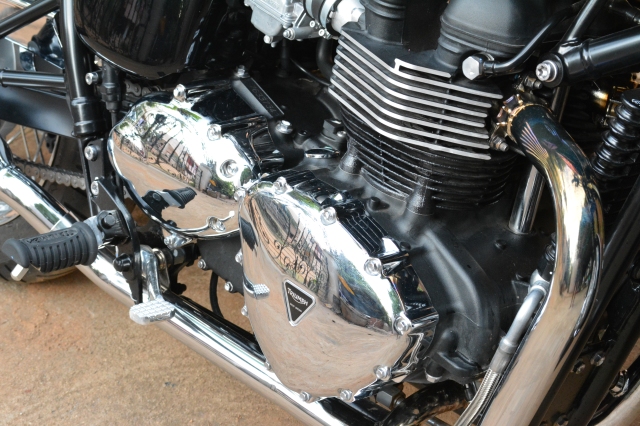 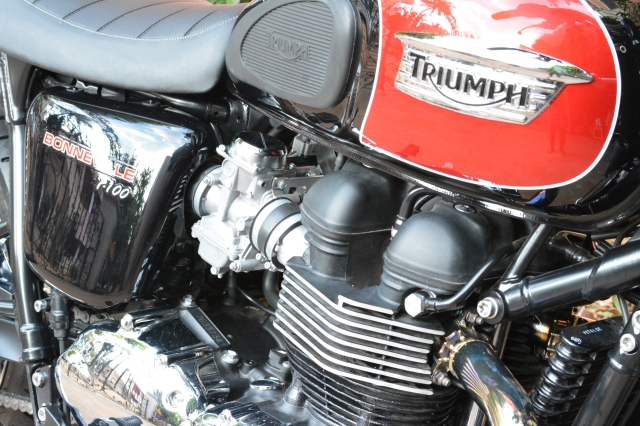 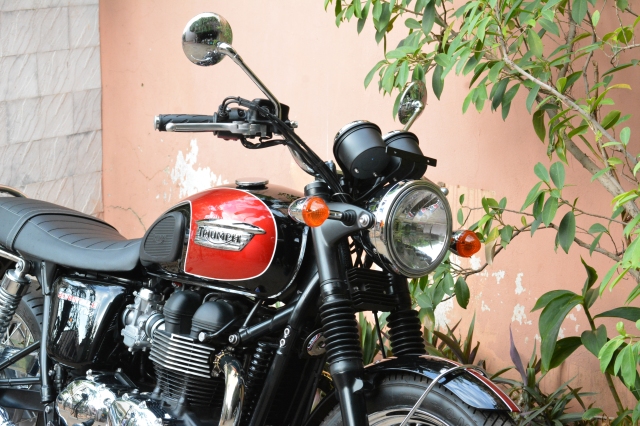 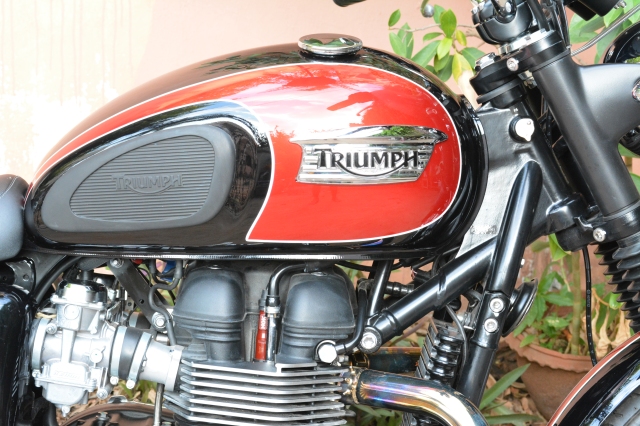 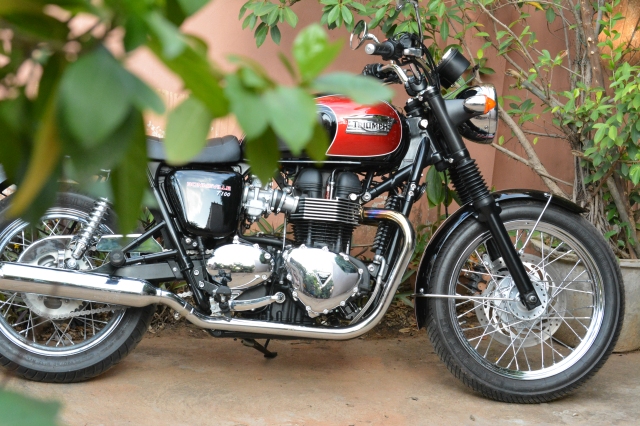 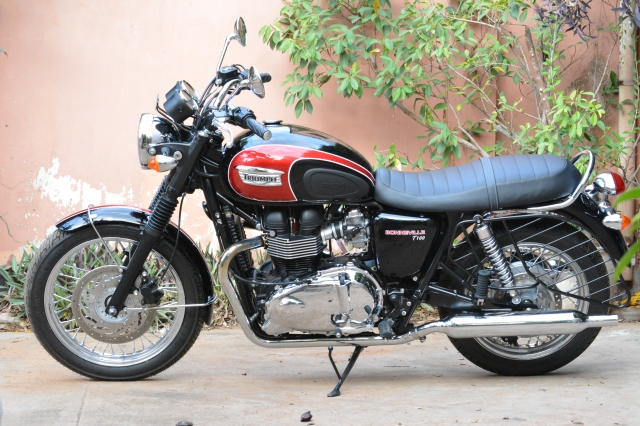 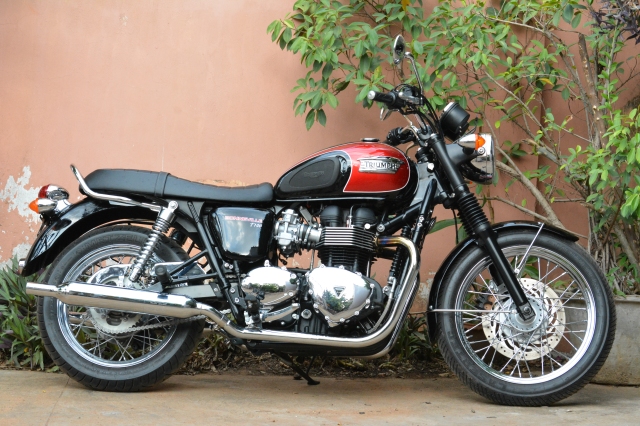